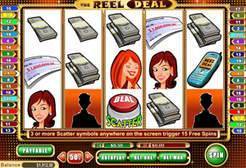 Virtue Fusion Limited, the Alderney-licensed online casino gambling platform provider has now released Deal Or No Deal Classic. Their version of this popular television game show phenomenon was designed as a fixed-odds version.

Recently acquired by Playtech Limited, Virtue Fusion is seen as a leader in the software provider industry. The group provides top notch software to the online gaming, mobile gaming, television gaming and land-based gaming sectors. The game is being rolled out across more than 20 licensees, with over 30,000 daily players. The Deal Or No Deal Classic game offers those who play it the chance to go round to round with the banker at the end of each round, to guarantee their cash prize.

The Deal Or No Deal Classic Endemol product is expected to be a grand success, with Chief Executive Officer for Virtue Fusion, Bob McCulloch, stating, “Feedback has been very positive across our network on the Endemol products we have launched”.

Chief Exec Officer at Virtue Fusion Bob McCulloch, also released statements regarding the entertainment value associated with Deal or No Deal Classic. It is no shock the game is expected to offer a highly entertaining value for those who get to experience it. McCulloch said, “Closely mirroring the television show, Deal Or No Deal Classic is a highly entertaining and playable version of the game and we are sure it will prove to be another big hit for our operators.”

All in all, both Virtue Fusion and Endemol appear happy with this collaborative release, with Head Of Products and Brand Exploitation for Endemol UK, Jurian Van Der Meer, stating, “Deal Or No Deal Classic kick-started the rise of branded games and it is still is one of the most compelling and successful on the market. We’re extremely pleased to continue our relationship with Virtue Fusion and we’re delighted that the Classic game is now available on the network”.

Of course, Virtue Fusion has used the Deal Or No Deal brand name for their games before. In fact, the licensing department was signed over a year ago to allow a bingo game based on the show.

Players can expect to find this popular game from brands like Bet365 Bingo and Mecca Bingo, along with many more. Other games are planned to fit into this same popular game sector, including a Big Brother game and Golden Balls game.